Congrats on winning a copy of The Striker’s Chance and thanks so much to everyone who commented!

I’m not going to lie to y’all – I’m not a huge fan of professional golf. It takes ages, winners and losers are often determined long before the game is finished, and how seriously can you take a sport where guys like Angel Cabrera can become champions?

I always groan when golf is the sport du jour on the gym TV screens…yet I don’t mind playing a bit of mini-golf or even hitting a few balls at a driving range. Just recently I found myself taking a couple of swings at a golf course here in Johannesburg, and with a cloudless blue sky and incredible highveld vistas I suddenly understood why so many people love to play. 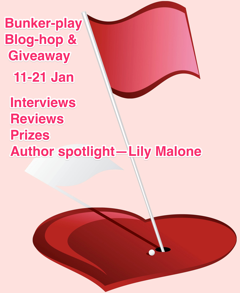 I’m a fairly committed middle-distance runner, always training for the next 10K or half-marathon. A colleague recently asked whether I was interested in joining her harriers club, and as I analyzed what turned me off about the prospect I realized that what makes running my favorite activity is that it’s completely solitary. Every run comes down to me versus my personal goals, and having to make conversation or keep up with a group is the last thing I want.

On the flip side, one of my favorite sports to watch – but not play – is football (or soccer for my fellow North American natives). Weirdly, what I love most about it is the team dynamic! I find it fascinating that a player can be a superstar on one team yet become shockingly bad when he moves to the next, or the way the addition of a new player can transform the cohesion of a side. And let’s not forget those on-pitch moments that are practically soap operatic with thrown-up palms and angry pointing!

How do your preferences shake out when it comes to playing versus watching? Are there any sports you love to do but can’t bear to sit through on TV? Tell me which sports you love and loathe and why, and one lucky commenter will win a copy of THE STRIKER’S CHANCE, my Carina Press debut about a sexy soccer superstar who joins a failing team and meets his match in – and loses his heart to – the ambitious publicist assigned to revamp his image.

BUT WAIT! As part of the Bunker-Play Blog Hop you also have the chance to enter a Rafflecopter giveaway including some awesome swag from author Lily Malone whose latest, Fairway to Heaven, is available now! Follow the links below for the giveaway and to visit the other amazing bloggers, and be sure to check back here on January 15th to see whether THE STRIKER’S CHANCE will be winging its way to an eReader near you!

I’ve always been an academic overachiever, and until The Striker’s Chance released a little over two weeks ago I would’ve taken a B and a B- very, very badly. But when they’re given by romance-reviewing powerhouses Smexy Books and Dear Author, those letters make me giddy!

From Mandi at Smexy Books: “When they do finally make it to the bedroom it made sense and didn’t feel rushed. They have good chemistry together as Holly really gets to know the real Kepler. I like this author’s voice. Looking forward to more.”

(I also made it into Mandi’s USA Today column!)

From Jayne at Dear Author: “I love the transition for Kepler from last chance, to team leader, to inspiration for kids. I can see him settling into his new leadership roles and the maturation that follows. His love for the game and determination to play his best shines through.”

Amidst the pre-wedding chaos on the work and home fronts, it’s indescribably awesome to see my characters resonating with readers and garnering the (qualified!) accolades they totally deserve. Plus each review shows me ways to improve as a writer and illuminates facets of my story I never thought about, so selfishly I love to see them rolling in, good, bad, and otherwise!

Things are hectic this end as I scramble to finish edits for my March release with Samhain (fyi y’all, the cover is amazing) and get the manuscript for its sequel to the same editor before I leave for my wedding – oh, yeah, and that wedding shindig takes up some time too! Happily I completed this interview for the lovely Minxes of Romance in a less busy period – check it out!

Release week for The Striker’s Chance is winding down, although being without power at our house for 30+ hours certainly kept things lively! Electricity workers are on strike here in Johannesburg and I had the uniquely South African experience of filling my house with lit candles and paraffin lanterns. In the words of Leonardo DiCaprio in Blood Diamond, “TIA.”

The lights are back on now and so is the blog hop, with a guest post on Delilah Devlin’s fabulous site. Check it out and happy Friday!

Release week excitement continues as I guest-post on a couple of fabulous blogs this week! I’m talking about reconciling romance and feminism at RR@H:

And I’m detailing my journey to publication at Carina Press:

I’m really proud of both these blog posts so take a look and leave a comment if the mood strikes, and be sure to come back to this lilttle ol’ blog tomorrow for a giveaway!

Release thus far has been beyond fabulous. In addition to an amazing outpouring of support from friends and my fellow Carina Press authors, The Striker’s Chance got 4 out of 5 stars from the inimitable Mandi Schreiner at Smexy Books!

A sexy excerpt from the novel is now live at the Contemporary Romance Cafe, so head on over to check it out! Or you can cruise by my awesome buddy Steph’s blog to see her photographic evidence of release day and link back to another excerpt. As for me, I’m home from work and thinking it might be time for a covert adult beverage!

I have a guest post scheduled today at the Contemporary Romance Cafe, so check back for an update a bit later. I’ll also be at RR@H Novel Thoughts and Carina Press tomorrow and on Delilah Devlin’s blog on Friday, with a giveaway in between, so stay tuned!

And if you haven’t already gotten your copy, you can find full and updated links to buy The Striker’s Chance – including the audiobook, which still blows my mind – on the Books page!

Today marks four weeks since I left the UK and the time has absolutely flown. I still feel as green as a new shoot as I navigate my new country of residence, but I’m slowly getting to grips with the commute, the vocabulary, and the way of life down here at the bottom of a continent.

Every day it seems I make a mental note to pass on one or other funny expat observation and then utterly fail to do so, so I’ll try to encapsulate a few of my favorites.

–       This may be a side effect of living without a television for six years in the UK, but our new house came with a satellite subscription and 200+ channels of pure awesome. We get TLC from the US, BBC from the UK, and selectively-bought series from HBO and Showtime like True Blood and Ray Donovan. The airing schedule is a couple of weeks behind the US, but who cares? I can finally watch Eric Northman in flat-screen HD glory rather than a fuzzy download from a Chinese website!

–       Joburg natives are some of the nicest people you could hope to meet… until they get in their cars. I’m losing track of how many social events we’ve been invited to by people we barely know (including the woman who completed the insurance survey and suggested we go out with her friends about five minutes after we opened the front door). In the shops and on the streets people smile and joke and look you in the eye and apologize if they bump into you. But if you need someone to let you into a lane during rush hour? Forget it! Even though very little seems to start on time here, every driver seems to be in an urgent hurry and is unafraid of using the horn to let you know. I still find it hard not to get stressed by the impatience of other drivers, but I’m gradually learning to attribute it to ubiquitous haste and not a reflection on my driving abilities. Check back in three months when I’m bitching about slow drivers hogging the fast lane!

–       Living in an upscale neighborhood, going to nice restaurants and a brand-new gym, and mingling almost exclusively with fellow high-achieving professionals in what is arguably Africa’s most developed city makes it easy to forget that South Africa is the most unequal country in the world. I’ve never been comfortable with the humiliating spectacle X-Factor and American Idol make of poorly auditioning contestants (to quote Extras, “we wheel out the bewildered to be sniggered at by multi-millionaires”), but Idols SA – the local incarnation of the franchise – brings a new severity. In the US we laugh at fat contestants with no self-awareness, in the UK we laugh at immigrant contestants singing in broken English, and in Idols SA we laugh even when the contestant’s hometown displayed on the bottom of the screen reveals they’re from an incredibly deprived, crime-ridden, opportunity-barren township. Yeah, maybe they suck at singing, but there’s something pretty sinister about people tucked cozily in front of their TVs ridiculing someone who may very well be headed home to sleep on a packed-dirt floor.

–       Yesterday I saw a city bus that pretty much summed up my experience thus far. The digital readout on the front of the bus, meant to display the destination, instead repeated in scrolling neon: “??????????????” And after four weeks in Joburg, that’s how I feel most of the time – not really sure where I’m going, but happily strapping in for a wild ride.

In non-expat news, it’s less than two weeks until The Striker’s Chance releases from Carina Press! It’s already gotten its first review and I couldn’t be more chuffed. I’ve added pre-order links for ARe and Barnes & Noble so feel free to buy multiple copies for multiple devices. 😉 I’ve got a lot of guest posts all around the blogosphere in the pipeline, so keep your eyes peeled!

I’m sharing the first-ever excerpt from The Striker’s Chance over on The London Diaries – have a look!