ALIVE DAY re-releases today for $0.99! Book #2 of the Homefront Trilogy is a heavy-but-happy military romance novella in which love lights up a dark time. Grab a satisfyingly angsty read for less than the price of a coffee: http://amzn.to/2f5sMAB

CROSSING HEARTS is only $0.99 this week! Meet the men of Atlanta Skyline for less than a dollar, just in time to get acquainted with Oz when DEFENDING HEARTS releases in September.

Giveaway alert! 100 copies of DEFENDING HEARTS are up for grabs at Goodreads until 7th August. Get ’em while they’re hot!

The re-releases roll on, and Alive Day – Book #2 of the Homefront Trilogy – is now available for pre-order, arriving on your Kindle on 1st August.

Meanwhile Boots on the Ground is still $0.99 until Alive Day hits digital shelves, so you still have time to grab it for less than a dollar!

Samhain Publishing’s closure earlier this year meant a number of my books with them became unavailable. Having never ventured into self-publishing – and being a technophobe – I was nervous about whether I’d ever get those titles back into circulation.

Thankfully I have a friend in the brilliant Romy Sommer! Romy has recently started up her own business as a writing coach, and I jumped at the chance to be one of her first clients. With her expert help (and gentle prodding), I’m pleased to announce the Homefront Trilogy will be re-releasing over the next three months.

Originally released in 2014, the Homefront Trilogy is a trio of military romance novellas about three infantry soldiers settling back into Stateside life after a tough deployment overseas. After watching Sebastian Junger’s excellent film Restrepo (and I can recommend his new film about Syria, although it’s a hard watch) I wanted to write military romance that had military-related conflicts at its center, rather than just a dude in a sexy uniform. The heroes in the Homefront Trilogy struggle with where they fit, if they fit, and who they want to be – and of course the heroines step up to help them figure it all out.

The first novel, Boots on the Ground, will re-release on July 4th, and I’ve temporarily priced it at $0.99 to help readers get hooked on the series! The second and third books will re-release in early August and September, just ahead of Defending Hearts releasing on 19th September.

I really love the Homefront Trilogy, and I hope its re-release will find some new fans, too!

On Monday the 5th June I’ll be participating in my first-ever Facebook party, courtesy of my fellow American-in-South-Africa author buddy Erica Taylor! From 12:30 PM (US East Coast time) I’ll be hosting a guaranteed eclectic slot replete with eye candy, giveaways and general disjointed banter. Be sure to stop by!

A release-week giveaway is live at Just Contemporary Romance! Comment to win a copy, or just hop on over to read an embarrassing story about my attempt to speak Afrikaans in the Netherlands. 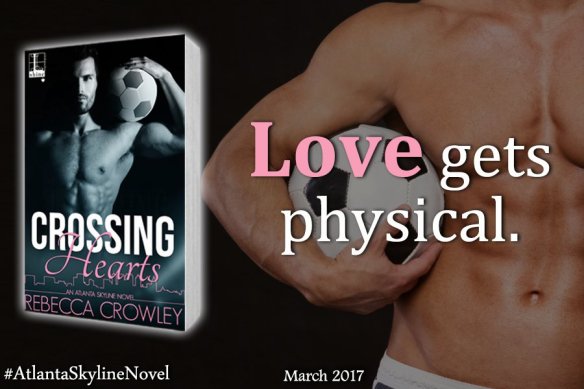 The Atlanta Skyline series officially kicks off today as Crossing Hearts hits the shelves! Full buy links are on the Books page, or you can one-click at Amazon.

Stay tuned for a giveaway starting tomorrow, and happy reading in the meantime!

The sad news in Romancelandia today is that Samhain Publishing will finally be shutting its doors after 12 years. Although The Striker’s Chance released first, Secure Target – released by Samhain – was the first novel I completed and submitted after a six-year writing hiatus. I went on to publish five books with Samhain and as an author, couldn’t fault the outstanding editing, beautiful covers and awesome marketing support I received.

The Samhain site will go dark on the 28th February and their titles will begin disappearing from third-party retailers. There may be a big gap before I’m able to get these titles back up for sale, so if there are any backlist books you’ve been contemplating, now is the time to buy! That goes for any and all Samhain authors whose books you’ve ever enjoyed. Some have built their entire careers on Samhain’s foundations and will be much more greatly affected than me, and I know they’ll appreciate every last penny of support.

Hello faithful readers! I’m minutes away from signing off for the holidays – including a once-in-a-lifetime trip to Zimbabwe – but I have a late-breaking opportunity for you to up your festive game!

From 1 January my publisher will be giving away two print copies of CROSSING HEARTS via Goodreads, closing the 19th January. Start off 2017 right by entering here: http://bit.ly/2ilm2ux

Happy holidays to you and yours, and all the best for 2017!