I’ll always remember that day last November when I came back from a (slightly boozy!) work lunch to find an e-mail from Angela James, Executive Editor of Carina Press, saying the team loved my contemporary sports romance and wanted to offer me my first-ever contract! My reply e-mail was embarrassingly gushy, and that evening my fiance and I downed far too many Sol beers in celebration.

The intervening eight months have been long, eventful, and full of firsts. First contract signed and executed, first art fact sheet, and first – and hugely informative – editing process. There have also been some seconds – second contract with Carina Press for my holiday novella, and second contract for a full-length novel, this time with Samhain Publishing. But as the clock steadily ticks down to the release date for my debut, The Striker’s Chance, I’m delighted to share what is possibly the most exciting first of all: the cover reveal!

Now, without further adieu, I’m delighted to reveal the cover for The Striker’s Chance! 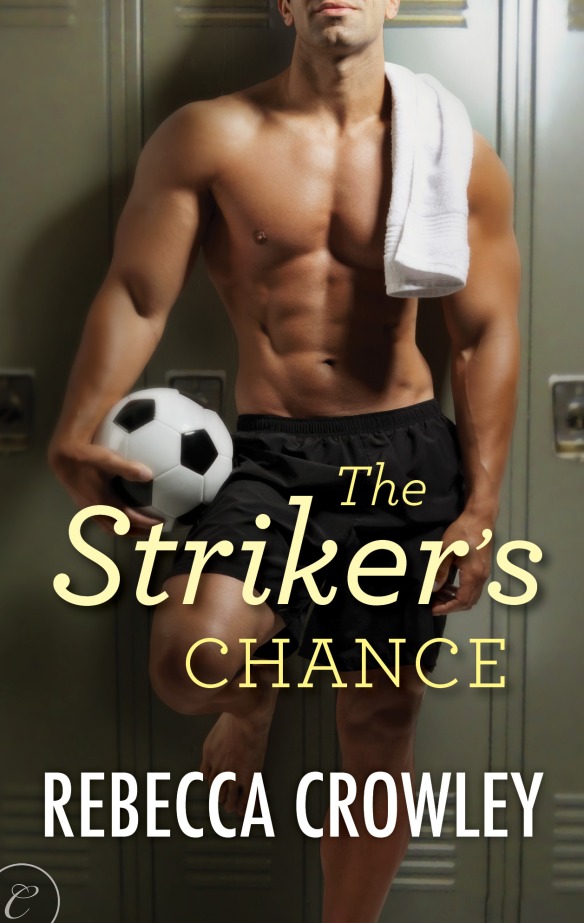 Landing the PR contract for North Carolina’s new soccer team could take Holly Taylor’s career to the next level. Her task? Make Kepler “Killer” de Klerk, an athlete with a party-hard reputation, a star. But revamping the sexy footballer’s image while battling her unwanted attraction to him is easier said than done.

The car accident that derailed Kepler’s European career also gave him some much-needed perspective. He’s ready to give up on fame and focus on the game he loves. The last thing he needs is a headstrong brunette pushing him back into the spotlight, even if butting heads with her is the most fun he’s had in ages.

The more time Holly spends with Kepler, the more she sees how different he is from his tabloid persona. But when she’s offered her dream job for a price, she finds herself torn between the career she’s spent years building and the man she doesn’t want to give up.

Phew, that is one sizzling dude. These cover designers sure have a hard job, don’t they? Flicking through photo after photo of sexy, shirtless guy – but I guess someone’s gotta do it, right?

There’s still a little over two months to go until The Striker’s Chance releases, but you can pre-order it at Amazon and Amazon UK, and at least there’s a little cover eye candy to ogle in the meantime!